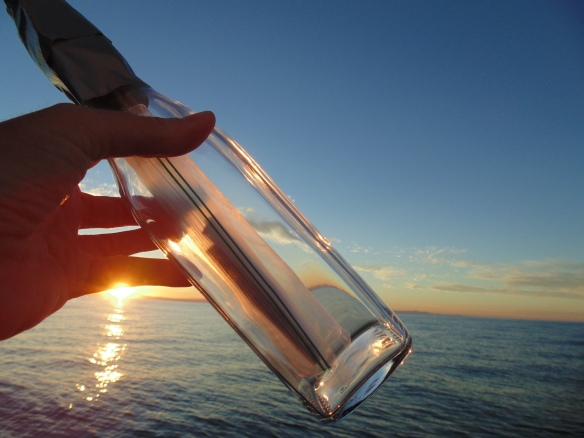 a message in a bottle over the Sea of Cortez

This is what I came here for. Encountering the sea and it’s creatures in harmonious thrill.  Our 129 miles from Puerto Escondido to San Carlos was nothing short of excellent. The night’s briny air engulfed my senses and pushed me to a new level of gratitude for being in a boat.  On the ocean.  And not fearing the what-ifs (what if the rudder falls off, what if we hit a submerged cargo container, what if the mast breaks, what if…what if…what if).  A transformation has happened somewhere since leaving San Diego. Other sailors have told me that hair raising or uncomfortable moments at sea dismantle the temptation to get stuck worrying about “the what ifs.”  Eventually, one learns to prepare, prevent, maintain, and then respond when necessary.

To recap the crossing: Well, it was a calm and sunny day leaving Puerto Escondido.  Maybe it seemed extra calm because the wind had been blowing up to 25 knots the previous few days.  Maybe it seemed extra ‘sunny’ because once again I was cut-free and allowed to venture into unfamiliar places.  A National Geographic cruise ship was at the fuel dock as we sailed by.  It was rewarding to wave “Bon-voyage” to a ship of high-end adventure seekers; as though I was leading the way for all of us.

Traveling northeast in the winter, when most other cruisers are going south, the horizon was void of other boats and yet I didn’t feel alone.   Captain Chameleon and I agreed to 3 hour shifts, where one could nap and read, while the other manned the helm.  When it was my turn at the helm I peeled my eyes so intently for whale sightings that I thought my eyes would cross.  Fortunately a little saying came into the crevices of my brain; “if you look to hard for____, you just might miss____”.  Ok, I need to stop looking and be in the moment.  What do you know, I see a sea turtle, lots of birds, and a shark fin (the captain saw it first).  The next morning a humpback breeched twice a few hundred yards off our starboard side. 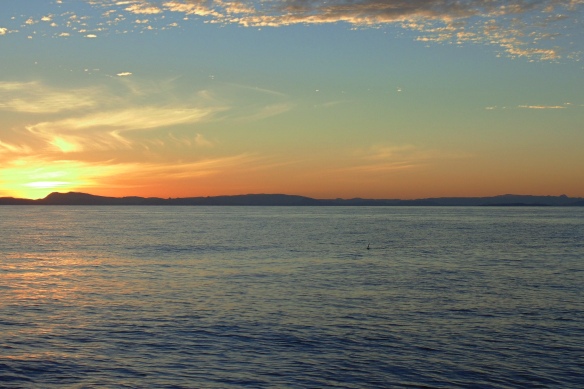 Spotted a shark in the water

The moon rose in a way that I’ve never seen before; the sky was so clear that I mistook a few stars appearing over the horizon as the running/steaming lights from another vessel; birds floating on top of the water as though asleep; the sun rising and the moon setting were in equal brightness…the ocean at night was mysterious but not scary.

Then the fog came.  Not a scary experience because the radar gave us “eyes’ for the fishing boats that we started encountering closer to San Carlos, but it was a very odd sensation.  Steering north, directly by compass, and with the waves at our beam, it felt as though I was turning in circles.  Dizziness would come over me and I would have to look away from the compass and waves to get my baring’s.  Fog does bring mystery.  Once I picked up something on radar that we thought was probably a panga without lights.  Probably they were fishing in one spot, but none the less, we were within a quarter mile of each other and I couldn’t see them…to close for comfort at sea.  We sounded our horn and the “what is it?” that we had picked up on radar moved away from us. Maybe it was a ghost ship! Anyway, we came into San Carlos, pulled into a marina, and just in time for me to start getting in the Christmas spirit of things.

1 thought on “A night on the Sea of Cortez”