Moored in Avalon harbor and perched comfortably on Seamore Pacific, I’m ready to handle a bit of multitasking: journaling; scanning the waterfront to marvel at Avalon’s beauty; and people watching, specifically other boaters.  Arriving just two days ago, a Catalina routine has taken shape.   Parts of the routine are enviable and other parts, not so much.   Our Catalina shakedown cruise has been true to it’s name.  It has shaken loose a few of my whims, wants, and obsessive compulsions.

Captain Chameleon has long accused me of throwing things away, including the  sandwich he is eating if it isn’t nailed down.  Guilty.  However, after Monday night’s 72 nautical miles (14 hours) I have new insight into  the error of my constant de-cluttering.  I’m humbly and eternally grateful for two items he salvaged from the give away pile they had been banished to.  First, a brown goosedown comforter that came with Seamore Pacific (previously the Bobby McGee).  After a washing it still smelled a bit musty and the color too drab for adventure seeking.  Second, a tangled mess of line and metal hoops, otherwise known as his and hers  harnesses; ones that sailors rely on to reduce the chance of being thrown overboard.  Captain Chameleon had acquired them when he purchased his Moody 33 and with our move to Phoenix they followed, ultimately  hogging precious shelf space in the garage.   Sentimental to him, they had been saved from my de-cluttering wrath only because  they harkened a chance of going to sea.

Thank you Jesus, Mary, and Joseph for the brown comforter that provided warmth, relief, and security from the dense, dark, and chilly  night.  The ocean air was damp and windy, but it was my inner  timid state and waiting for “the shoe to drop” that was the real cause for feeling chilled to the bone.   And thank you for the harnesses that safely tethered us to Seamore Pacific as she sliced, rolled, and rocked through westerly moving rollers.  Finally, thank you for Captain Chameleon’s understanding of my whims, wants, and trivial obsessions in life.

Safely making it to Catalina and having the good fortune to enjoy her beauty has caused me to reframe whims and wants.  Internet access doesn’t come easy these days for Seamore Pacific.  However, I’ve quickly come accustomed to our Catalina routine of dinging ashore, walking to the library, and logging in as a temporary Los Angeles library card holder.  Swell! 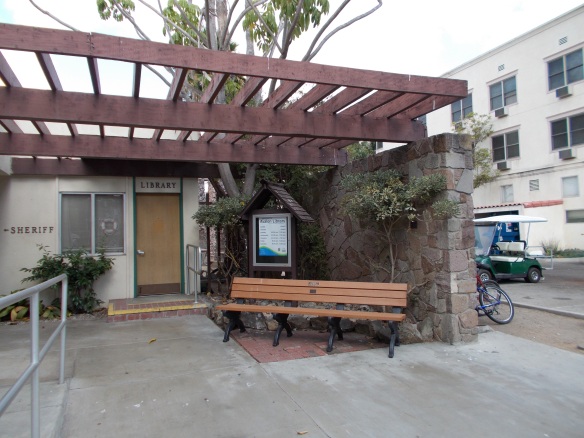